Whether you believe it not, male misogynistic behavior is so deep-rooted in our society that raising boys how they really should be has become very difficult. There is a very famous and widely-used saying that “boys will be boys”, which has made it like a standard practice for parents to ignore and promote some of the major toxic behaviors any human can possess.

Whether you believe it not, male misogynistic behavior is so deep-rooted in our society that raising boys how they really should be has become very difficult. There is a very famous and widely-used saying that “boys will be boys”, which has made it like a standard practice for parents to ignore and promote some of the major toxic behaviors any human can possess. 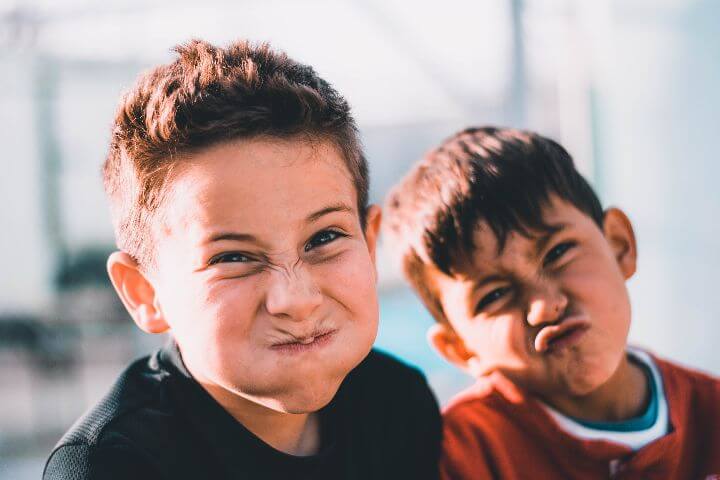 I am a mom of two boys. And I often find myself questioning if we are parenting our boys right. The problem I face all the time is to distinguish between behaviors that are normal versus what might lead my boys towards the “boys will be boys approach”.

Fortunately, experts believe that parents can support and raise their boys as good men because most behaviors are learned. Therefore, there are many things that you can do as a parent to raise your little boy as a person who is kind, well-mannered, gentle, empowered, and happy.

The negative stigma that surrounds boys and their upbringing is more cultural than biological. Society has developed the image of a perfect man to be strong, unemotional, competitive, fearless, rowdy, and powerful. Even so that we have also declared that it is a man’s world. That right there is an extremely negative connotation to embed in any child’s mind.

Firstly, you need to accept that boys and girls are different. There is no one size fits all model for parenting. You have to mold your parenting techniques as per the attitudes and behaviors of your child. However, for boys you need to focus on the following to support their upbringing in the right direction: 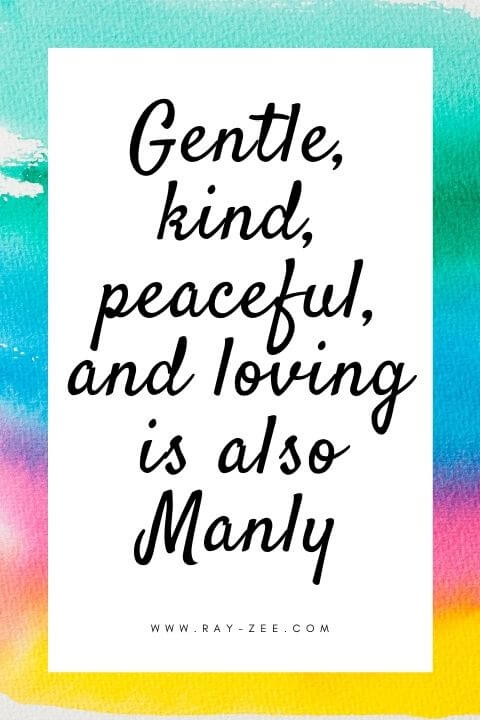 Boundaries do not only imply physical limitations like touching, hugging, kissing, etc. Boundaries can be physical, emotional, intellectual, material, time, and relational. Teaching your child about boundaries is enabling them to learn about their right of yes or no.

Teaching your son about boundaries will help him gain more confidence and he will become clear about his own needs and feelings. Plus, it will teach him to respect others and their boundaries from a very early age.

When it comes to emotions and boys, we tend to always separate the two. However, emotions are a natural human expression and everybody has a right to feel and express them. I am sure you must have heard someone saying “boys don’t cry” at least once in your lifetime.

It’s because of such stereotyping that boys learn to hold their emotions in, which turns into anger and frustration later on. Michael C. Reichert, a psychologist and a very famous author of How to Raise a Boy – The Power of Connection to Build Good Men says, emotions are like energy. They don’t do away on their own. They always translate into something. In such cases, it mostly misbehavior.

One of the best things that you can do for your son is listening to him and let him express his feelings without any judgment. Remember that you listening to your son is not the same as agreeing. It is only the first step to creating a relationship and coming with the solution together.

Once your son grasps that he doesn’t have to be afraid of rejection, failure, or judgment he will be more open to sharing his feelings, needs, and aspirations. 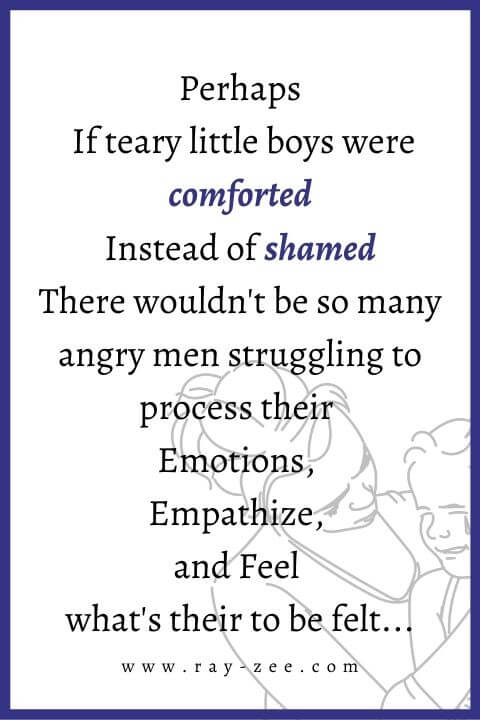 There are a few things that will help you to encourage your son’s emotional growth:

Most parents would constantly reject and ignore their son’s feelings or emotions (sometimes unintentionally) just to keep their son growing up as “manly” as he can.

When you teach your son how to handle and express his emotions respectfully, you are indeed helping your son take a giant step towards manhood. Because the world is enough to toughen up your little boy. Your job is to support and nurture his personality with kindness and compassion.

Communicate to build a strong relationship

Building a strong relationship with your children is extremely important. And effective communication plays a great role in it. Sometimes, there will also be days when sparking a daily conversation would feel like a major task. And that’s completely fine.

The number one rule towards healthy communication is being attentive followed by being non-judgemental. Have you ever thought about why you wouldn’t want to share something with your parents (if that’s the case)? Probably because you are afraid to be rejected, judged, or misunderstood.

Your children feel the exact same way. Especially boys, because they are expected to figure everything out on their own, behave a certain way, and be strong in every circumstance. Now think, is it really wise to expect your son to behave properly and do as you say even when you are not providing him with nurturing.

While raising boys, it becomes very important to constantly keep up with meaningful and healthy conversations. As most boys are filled with energy which makes it difficult for them to be still in one place. Here are some important points to keep in mind while establishing healthy communication to build a strong relationship with your son:

Even when you are laying out straight house rules and expectations, keep in mind to make a mutual decision and let your son know that you love him. As parents, we are there to protect, nurture, and help our children to discover the best of them. And not to pressurize them into doing things that we think or want!

Becoming a stable, healthy, and happy adult requires a lot to be done in the early years of life. Most parents tend to ignore the fact that raising boys doesn’t mean that you have to be as tough as the world outside. Home is a safe sanctuary for every child.

Believe it or not, even your son would love to spend time with you than do anything else most of the time. Yes, when boys grow up, they like life differently. But the safe space you created in their early years has done more benefit to them than you can imagine.

Creating a safe space would encourage a family culture. It helps your son to recharge and get ready for the world in the best way possible. Even teenagers and adults find safe spaces to be an enormous gift where they can feel secure, happy, and comfortable after tough days at school or workplaces.

Here are a couple of things you can keep in mind while creating a safe space for your son:

Boys too need their family in their life who they can rely on, especially emotionally. It is essential that as parents you create a strong relationship, a safe, and non-judgmental space where your children can learn about mindfulness, empathy, and how to create healthy relationships. 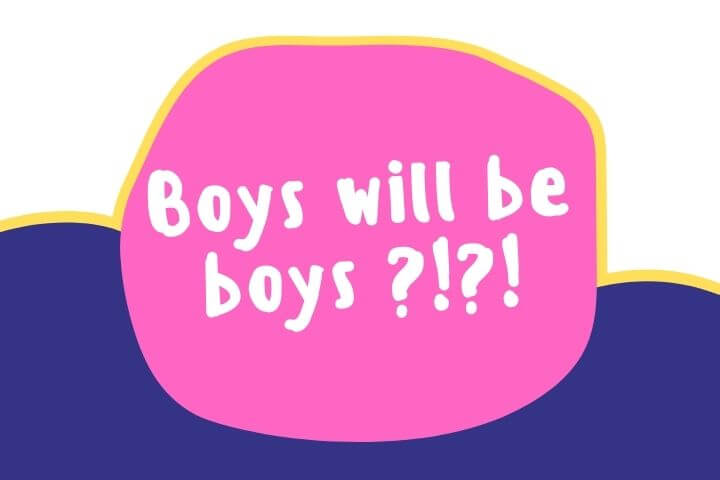 Once you are done laying the positive parenting techniques for your child, you should focus on attitudes and behaviors that might be leading in the wrong direction. These might be things that you might be encouraging unintentionally or intentionally.

Raising boys with such attitudes and behaviors is almost like messing up your next generation. Because these boys will grow up to be men who are emotionally unstable, toxic, misogynistic, challenged, troublesome and even bad fathers.

“This is for boys and this is for girls” is not one of the smartest ways to start your parenting journey. From a very early age, most parents would set straight rules for boys and girls differently. I understand that the aim here is mostly to make boys manly.

Stereotyping and treating little boys as the king of the house leads them to feel superior. It is actually one of the most toxic traits a man can have. More than anything it’s the mom who supports this feeling of superiority in a boy than anybody else by treating him differently from her daughter.

A recent survey showed that most fourth-graders which also included girls believe that their fathers rule their house. The study also showed that many young boys believe they are smarter than girls and the girls need less school than boys.

Such men grow up disrespecting and disregarding everybody in their lives, let alone the women. Instead, teach your son to be respectful regardless of gender, religion, race, or status. This is how you can raise your son to a gentleman:

Limit the amount of violence your son is exposed to

Boys are expected to be aggressive, tough, and violent. This is again one of those silly expectations which “prove” that he is a “man”. Such expectations have literally spoiled several generations and are on the way to do the same in the future.

The rough and tough image is not an image every man would like to go for. But the pressures from society have made it a norm. Little boys observe that behavior and then adapt it. They feel it’s completely normal to be violent and aggressive in a way that threatens others. Instead, try this:

Another point that most boys find okay to do is gender-based harassment. The mindset of being superior and tough leads most boys, young and adult, towards shaming, insulting, bullying, taunting, and name-calling girls and even boys who aren’t as masculine.

Plus, they think it’s okay to harass people as it shows they are strong and everyone is below them. It is extremely toxic behavior that needs to be accounted for from a very early age. Interestingly, everything starts at home whether you realize it or not. Here’s what you need to do:

Tiny mistakes that are made continuously can make a huge shift in how your child turns out to be as an adult. And, it’s okay to make mistakes. But, it’s necessary is to identify where you might be going wrong and then correcting it as soon as you can.

Parents need to understand that treating their sons differently to their daughters, pressurizing to behave “manly”, disregarding their son’s emotions, and leading by negative examples is perhaps damaging the true personality of their son.

You don’t need to worry. The world is enough to shape your little boy into the man you hope he would become. A child spends most of his time at home observing and adapting to what their parents do. Therefore, your focus should be on giving the best environment to your son where he can actually see and learn how to be a gentleman. Rather than spoiling your son in the name of love.