Friends are family. They bring positivity, support, and happiness into our lives. Even researchers believe that healthy social life plays an important role in keeping your heart and mental health in check as good friends can bring you comfort and joy and help relieve stress, loneliness, and isolation. Every friend group has a certain type of friends which amazingly common in most friend groups.

Friends are family. They bring positivity, support, and happiness into our lives. Even researchers believe that healthy social life plays an important role in keeping your heart and mental health in check as good friends can bring you comfort and joy and help relieve stress, loneliness, and isolation. Every friend group has a certain type of friends which amazingly common in most friend groups. 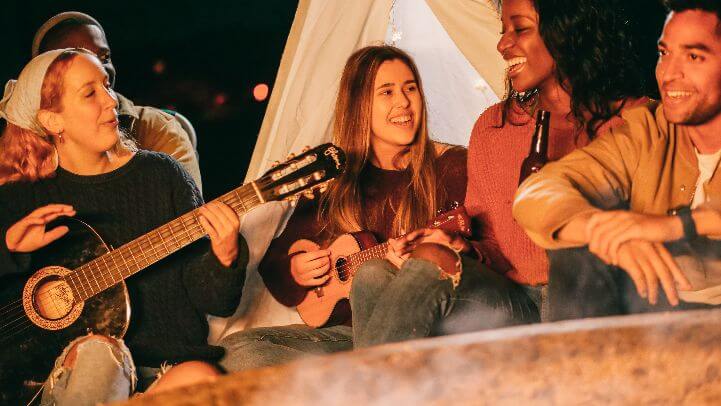 Great friendships are hard to find. If you have great friends with you then treasure them and work on making your friendship even stronger. Throughout your lifetime, you will be a part of many friends’ circles. Based on that, these are the most common types of friends you will be dealing with:

Every group has that one friend who takes care of everybody else. This person is kind, straightforward, helpful, and extremely loyal. They would help you through things no matter what. You can think of them as a parent of the group.

However, for many other group members, this particular member is the hardest to accept. A parent friend often comes across as bossy and directive.

This is the friend who brings life to a party. They are fun and have the wildest ideas about what you should do next. They always seem happy, chirpy, and popular. The wild ones are driven by positive energy therefore they like to surround themselves with similar energies and they have zero tolerance for the “poor me” chat. They like to bring fun in life and that’s what their purpose is in your life as a friend.

But they are also one of the hated ones by your parents. Because they are so wild, carefree, and adventurous your parent might have a slight concern.

The lover doesn’t always mean that they are in love with you. But there is always one friend in the group who is obsessed with you and would love you no matter what. This can also be the person who you are close with – like a best friend. They would take you in when you are homeless s or heartbroken without any judgment.

They have very high expectations from you. Although they might not state much, your actions and words can really hurt them. Fights with such friends can turn ugly in seconds.

Humans are wired to like like-minded people. It almost like a part of the human pack mentality. But the is a friend in the group who has a polar opposite personality and views as yours. You might feel very disconnected from this friend as they see the world differently than you do.

But this friend is actually very essential to you if you give them a chance. They can help you understand and accept the opposite viewpoint, breakthrough the comfort zone, and ditch the stereotypes.

Every group has that one friend who is very rich and supports the finances of the whole group, gives free rides, lends money, and offers free lunches. They have the kindest souls and love helping their friends with whatever’s required. They make their friends their family and enjoy every moment with the friend group.

Such friends are often misused by the other members of the group. They are most likely taken-for-granted and only thought of as the bank of the group.

We all know that one player friend who likes to try their love-luck with every single possibility. They wear their heart on their sleeve and let other people know that they are available for a quick flirt. They know how to charm and most often they are successful.

However, they are mostly absent in the group because their focus is always elsewhere. They show up in the friends’ group then there is nothing else to do.

These are the Richie-rich but not the kind ones. Such friends love showing off their (their parents!) wealth. More so, the show-offs never leave a chance to tell other people how rich they are but never help other friends in need. They always have an excuse for not helping others.

Such friends are there because they need attention and honestly, they are good for nothing.  Either they show-off or bully others for not being as rich as them.

The most common one is a friend who thinks they are the center of attention and the most beautiful among all. And rightly so, they put a lot of effort into presenting themselves as the beauty pageant winners. You can also call them the “pretty self-obsessed ones”.

Their most important asset is their good looks. And they don’t leave any opportunity to cash that. They are also very active on social media and love to hear from people about how mesmerizing their looks are.

The one who is always in problem or is involved in making troubles. They think of themselves as mafia or someone who is super cool because they can stir the situation really well into something troublesome. Plus, they have never-ending stories about how they got in trouble and then how heroically they got themselves out of it.

Most commonly, such friends bring trouble with them. Therefore, it’s best to take caution before doing something crazy with them. Because they can save themselves but are not really sure about you.

The brains of the group. They are super smart and cunning. Technically, they are steering the whole dynamics of the group and no one really knows about that. Everyone is always in their favor on their face but talks ill behind their backs. They are friends with everybody but fail at developing stronger friendships.

They love to show and tell people how smart they are. Which often rubs the wrong way. They come across are cunning, rude, and proud.

A friend who lives right across the street or very close to your home. You guys spent the most time together as you live so close by. Most of the time, such friends make a mini group in a big group of friends.

They travel together to gatherings, study together, and stays close until they are living nearby. If you both continue to live in the same neighborhood then the friendships become really strong and last forever.

A mature one who seems to have advice on every single problem in your life. Sometimes they know what they are talking about and sometimes, they are just trying to keep up with the reputation. In either case, they mean the best for you. They want you to be successful and do the best.

A friend who is friends with literally everyone in the group. They have no controversies or bad blood with anybody in the group. Always there when anybody needs them and would help through tough times no matter what.

The friendly friend is awesome but they might not have a “best friend” or a strong place in the group. They also might feel left out when others are hanging around with others.

Coming late to everything is their motto in life. Even if they try, they cannot manage their life on time. Their life also feels like a big mess and they have no shame in showing it off. Be it anything, school, job, an important event, they always have a “valid” reason for being late.

The group keeps on waiting for them while they make their special entrance. Sometimes, it can get really irritating and the group might feel the need to exclude that friend from the group gatherings.

You have to be really careful about what you say to them. They can literally get hurt from the slightest of things and then make a scene about it. Such friends are also attention seekers and carry their emotional baggage everywhere.

Sensitive friends expect everyone to take care of their emotional instability and be extra careful about them. They become the baby of the group whom everybody should take care of.

They want to enjoy their life and put their best foot forward with empty pockets. They are always dependant on other members of the group to support their finances. Sometimes, they feel they do not fit well in the group and might be absent from most gatherings because they do not want to burden others.

They are very well aware that do not have the pocket to keep up with the rest of the group and manage their life too. Therefore, it’s best to silently support them if you can and do not make fun of their poor lifestyle.

The most important friend, almost like your soul-mate. No matter how big and amazing your group is. But every group has mini-groups and certain friends who are just the best. This one best friend is a perfect match for you and most close to you.

This is the friend (if everything stays well) who would stick by you even when the group grows apart.

18. That one friend who isn’t really a friend

Everybody wants to be a part of an amazing friend circle. But the reality is that most people will not be able to take their place in the group. They would just casually hang around to see if they can fit in. They are the temporaries in the group who just don’t fit well with everybody else.

Often, they get negative reactions from the mean member of the group, who try to make it clear that they do not belong with them.

Always trying to interfere in matters where they do not belong. They are always looking for some kind of gossip. At heart, such friends are always jealous of others and try to make up for their own voids through gossiping. They feel the never-ending urge to say or do something that kills the buzz. Their favorite time pass is to gossip about literally everyone and everything.

They are some of the most hated people in the group and they know it too. But they love being the evil one and spread more gossip about how everybody is “jealous of them”.

The social butterfly or an overbearing is the kind of friend who is friends with everybody else even outside the group. They love being socially active everywhere and enjoy the attention that comes with it. Such friends are also very talkative and they tend to overshare on quite many occasions.

Their over-socializing personality can sometimes become irritating for the rest of the group. As that friend is not just exclusive to the group of friends but they are actually a part of many other groups as well.

Every person is different and they bring something special with them. Even if you can’t get along well, try to respect and give an equal opportunity to the other person so that they can shine through without any judgment.

You will come across a million people in your lifetime. Not everybody can be your friend and they shouldn’t be. Being social and maintaining a healthy social life is very important. But the emphasis here is on healthy. Surrounding yourself with people who do no good to you is a waste of energy and time.

The quantity doesn’t matter. Focus on surrounding yourself with people who will play from your team and are willing to support you without any judgment. With whom you can truly be yourself and you can depend on them for an honest opinion.